We were planning on traveling overland from Budapest through Vienna, Croatia, Bosnia, and Bulgaria before arriving for a week in Istanbul. Then we put out a call to friends for suggestions, which came back overwhelmingly in favor of more time and more Turkey. Then we found a sweet flight from Vienna to Izmir 2 days later and thought, let's throw out our whole plan and go to Turkey!  We had a great 24 hours in Vienna and then it was off to Izmir.

We landed in Izmir and drove one hour south to Selcuk, the nearest town to the ruins of Ephesus. We found a little inn, Hotel Rilican, overlooking the valley and castle. We enjoyed the next two evenings with the innkeeper, Iksan, and his family, eating and drinking wonderful Turkish food on an outdoor terrace overlooking the beautiful view.

Our first full day in Turkey, we went to see Ephesus, an ancient city filled with history. St. Paul traveled through Ephesus several times in his life, and the Virgin Mary and St Luke may or may not be buried there. On the way, we learned a bit of history listening to a Rick Steve's podcast in the car, and got a Rick Steve's audio podcast guide for the site itself. The area was amazing, and very much gave the feeling of stepping back in time (there is an additional option to see some terrace houses which are being restored currently, and they were fabulous...see them!)! The mosaic floors in every room were just like we would use area rugs today...beautiful colors and detail.

The next morning we got up early and drove 4 hours east to Pamukkale and the ancient ruins of Hieropolis. As you drive into the town of Pamukkale  (which we're pretty sure only exists to service the tourists), the hillside looks like a man-made ski hill in the middle of summer in the desert. In fact, the area has hot springs with high mineral concentrations, which leave calcium deposit terraces called travertines. And it's essentially a grown-up, natural water park! You leave your shoes behind and walk up the calcium deposits as warm water cascades down your feet, stopping along the way for a dip in the pools, some quite warm, some refreshingly cool. At the top, we popped our sandals back on and explored the ancient city of Hieropolis. It was such a delight after a month in the very cold to go for a long walk through ancient ruins in my bikini! 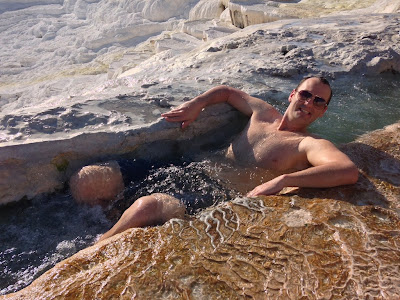 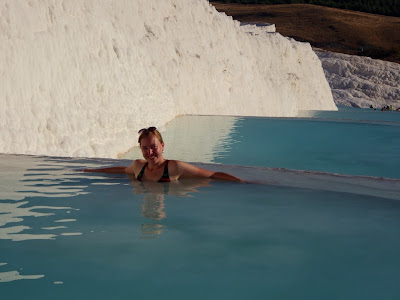 We spent the night in the village at a near-empty little hotel and hit the road early the next morning. Our destination was Oludeniz, a little town billed as a lovely watering hole along the turquoise waters of the blue lagoon. It disappointed, but the drive there didn't! 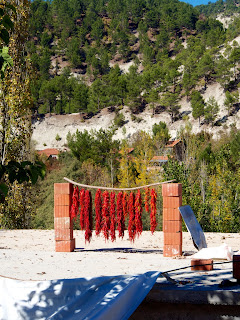 We failed to procure a paper map, and our iPad swallowed the directions after we left the wifi area, so we followed the signs to Fethiye (the biggest town north of Oludeniz). The Turkish road signs led us differently than google maps and we are so glad we followed! We drove over a beautiful series of mountains, through little villages, complete with Turkish men and women tending their family fields. Each house had peppers growing in front and strings of the peppers drying off the eaves. At lunchtime, we stopped in a small town called Cameli and found ourselves a feast at a local place called Yayla Restoran.

They welcomed us in with open arms to a buffet of bubbling pots, where a delightfully fat Turkish man acted out the dishes for us (my favorite was arm flapping to show the chicken dishes). We picked several few plates, feasted, had some post-lunch tea, paid our 18TL ($9) bill and we were on our way. So far, this was Cory's meal highlight of Turkey. 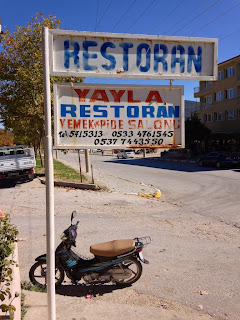 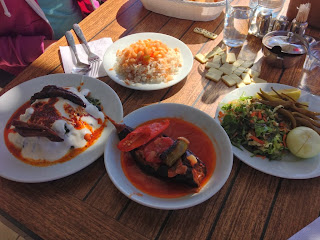 Back in the car, we drove the final hour or so to Oludeniz. Remember that quaint town we were expecting? What we found was a British version of spring break Cancun, off season. Block after block sold fish and chips, advertised in pounds sterling. And when we tried to order Turkish tea, they only had English  breakfast. And when we arrived to our hotel, which we had reserved online, it was closed. Empty. For the season. After a bit of scrambling, we found a cheaper, better place around the corner, just behind the Churchill Bar (seriously...we're not sure where all the Brits came from!). We had a nice hike, saw the disappointingly not-turquoise blue lagoon and continued north.

When we rented a car, my picture was to get out and really see the countryside and be able to stop along the way. On our way north from the disappointment that was Oludeniz, my picture was made complete! Cory pulled over at a fruit stand (knowing I'd been craving one) and I got out to investigate. I asked the owner how much for a pomegranate juice and he responded 3 lira. $1.50 seemed a bit steep for a juice on the side of the road in turkey, but as I'm not really in the business of negotiating 50 cents out of a Turkish farmer and his wife, I agreed. All the sudden, he pulled up two chairs into the shade for us, cracked open a pomegranate and a tangerine for us to eat while his wife made the juice. A couple of sips of homemade pomegranate molasses and it was time for her fabulous fresh juice. As we made our way back to the car, he came running after us with a big glass of his apple tea (to make us strong, as he motioned) and handshakes and hugs. Best 3 lira ever spent! 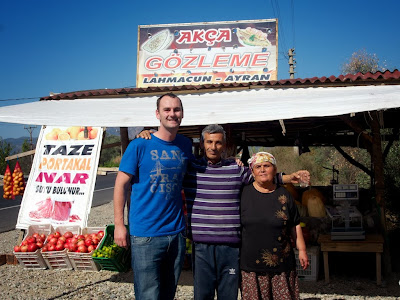 We arrived a couple of hours later in Bodrum, a larger tourist town on the water, with a castle right on the central pier. We were worried about another touristy harbor town, but we loved Bodrum! It reminded me of what I imagine a Greek island to be like, with white buildings and cobbled streets coming down the hill right to the water, with a harbor full of gorgeous wood hulled boats, and tons of bouganvilla. Heaven! We found a super budget, yet delightful hotel (Sevin Pension, for $16 per night, including breakfast and free parking!) and spent the next day meandering about town.

Bodrum is known for a few things. First, in ancient years it was known as Halicanarsus, and was home to Heroditus, the "father of history." Second, in about 350 BC the king of the area, King Mausolus had a tomb built for his impending death, the Tomb of Mausolus. You may recognize that as one of the 7 Wonders of the Ancient World, or as the derivation for the term Mausoleum. Neat, huh? Third, there is the Castle of Bodrum, on the pier in the center of the harbor. It now houses a really great underwater archaeology museum, but was once the conquering of Alexander the Great.

We started north on our last day on the west coast, with several hours until our flight from Izmir. We stopped in Didim to see the Temple of Apollo, and it was amazing! First of all, google maps led us to the town of Didim down the most swoopy, twisty two lane road, through fields of fluffy cotton, past tractors pulling carts of locals from town to town. Didim itself is not particularly charming, but when you get to the temple on the way out of the town, it is amazing. With incredibly tall columns, where just the foot of the column is chest height, you very much get a humbled feeling, like you're trespassing in a home of the gods. You can only imagine what it felt like go be there when the temple was standing! And at a super bargain price of 5TL each, it was easily the biggest bang for our ruin buck so far.

We had heard before this trip that turkey is covered with isolated ruins, out in the countryside, but we hadn't really seen that yet. As we drove north to Izmir, we got it. North of Didim, we continued on the smallest roads we could find and before long showed up at Miletus. We didn't go in, but took some photos from outside before continuing on. We drove across a flat plain of farmland (which we later found out used to be the Aegean Sea!) and came to Priene, a former ancient city on top of a hill, built for Athena. It was good that we had seen (and been guided through) Ephesus first because we understood much more of what we were seeing: a smaller city, but with all the same elements...theater, temple, agora, etc.).

Back to the road it was time to blast to Izmir, meet our rental car guy at the gas station (a little worrisome, but worked out in the end!), and make our flight to Kayseri, to begin our Cappadocian adventure! 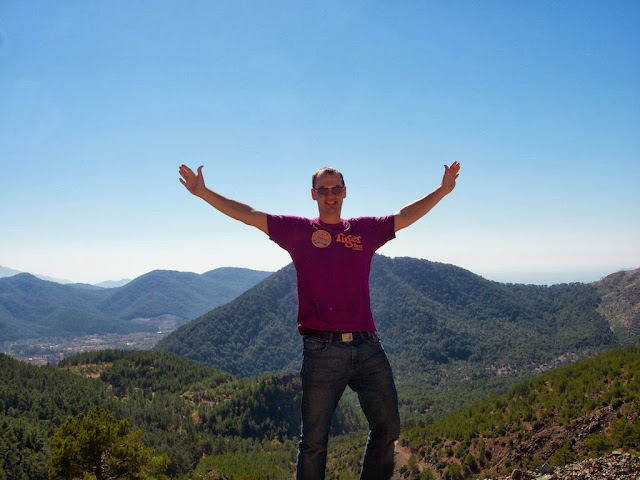 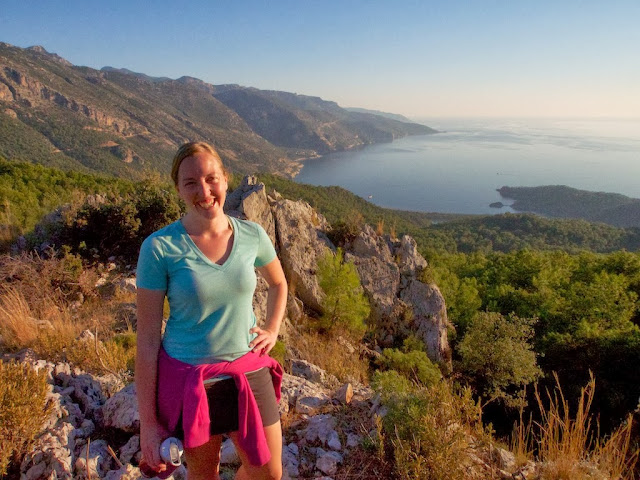 For more pictures of our Aegean adventures, check out our Flickr page!

Email ThisBlogThis!Share to TwitterShare to FacebookShare to Pinterest
Labels: Turkey