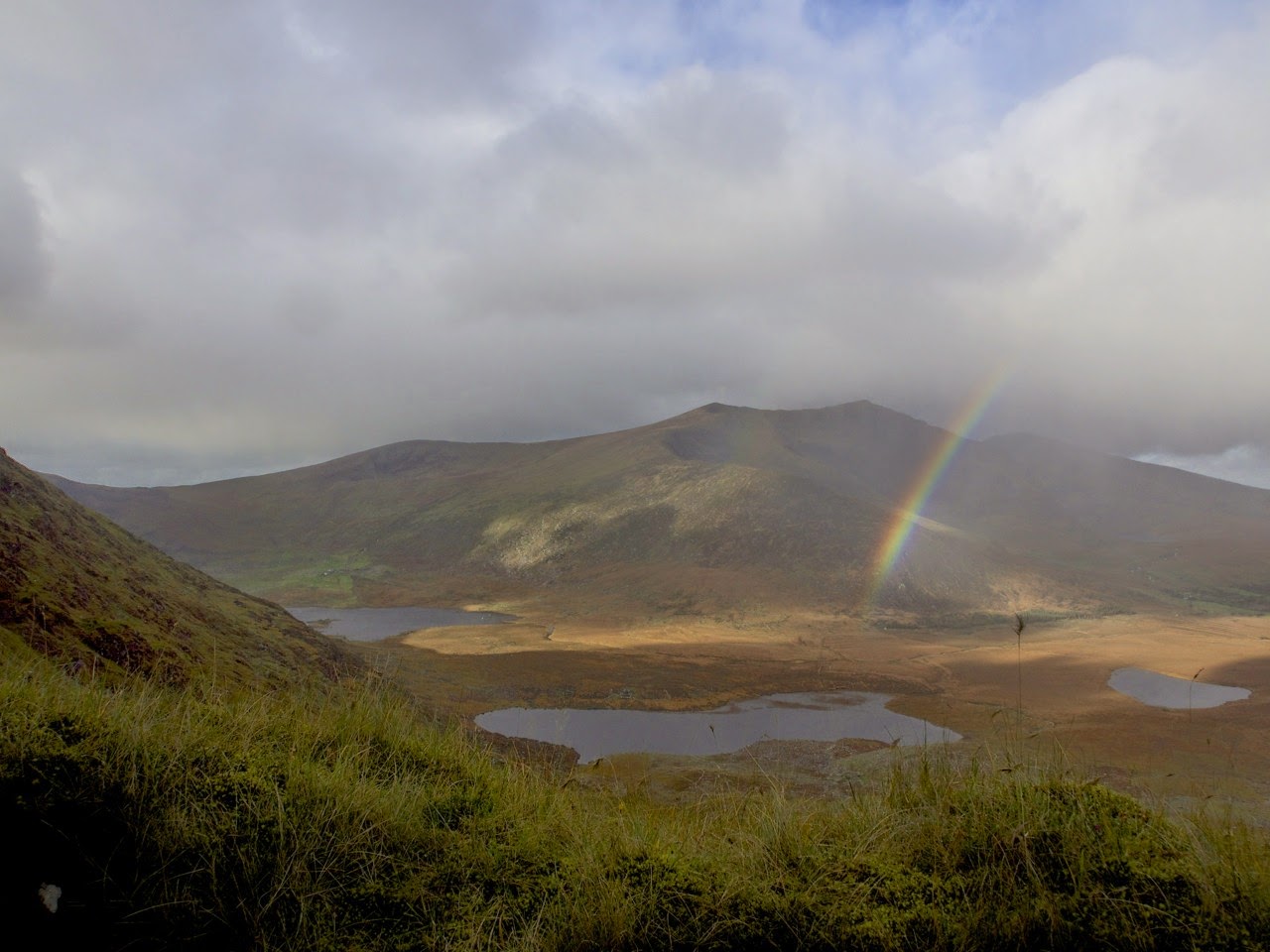 After bidding a bittersweet adieu to Maire and Carl, it was time to head out on our own, with no real plan except to end up in Dublin for our flight to Birmingham in 3 days. We got our rental car in Shannon and started south. I had heard of the Ring of Kerry (who hasn't?!) due to it's incredible views of the water, steep cliffs and windy one way roads. But we'd also heard that it was packed with tour buses and people, and quite frankly, a pretty long day in the car. So we elected instead to enjoy the Ring of Dingle (or "Ringle" as we came to call it), which is a bit shorter, with fewer people and no tour buses, but also insanely beautiful.

We spent the night in Dingle, a ridiculously charming summer town (and yes, we were there in November) with cobblestone streets and cozy pubs, right on the water. We stayed in a B&B we found in an old stable on the waterfront (the charming Quayside B&B), run by a fabulous (and tiny) man who introduced himself as a leprechaun. And he really did look like one! Because we arrived a little late (due to many stops on the incredibly gorgeous drive from Shannon that morning), we didn't get on to drive the 30 mile loop of the Dingle Peninsula until about 2pm. And by then it was kinda stormy and getting dark, but we didn't go to Ireland in November for sunshine and butterflies!

We took Rick Steve's guide of the peninsula with us, so we would know where to stop and learn things, but either our odometer was off, or his directions were, so we mostly ended up just stopping where we wanted to. And it seems each time we stopped, the sky would open up, dump a bucket of hail down, and then 3 minutes later, the sun would come out, and we would explore. The two highlights of the pensinsula were the pastures of sheep (I just couldn't get over all those cute sheep!) and the church at the end: the Gallarus Oratory. We almost didn't make it in time to see it in the light, but it was a special place. Built 1300 years ago, it is one of the earliest Christian churches preserved in Ireland today, and well worth the visit. After our amazing (and cold) day, we spent the evening in a pub, playing dominoes by the fire, drinking hot wine and enjoying some live music.
The next day we drove east, with the goal of reaching Kilkenny, but didn't make it very far out of Dingle before a castle-type structure by the water caught Cory's eye and we decided to go find it. We drove down some local roads between pastures, which ended at a gate with a path into a pasture that said, "public path." So it was on foot from there. We started up the path into the pasture, following the general direction where we thought we'd seen the castle. Seriously, we were just traipsing across someone's sheep pasture, sheep and all! The path went through a bit of a muddy section, so I figured I would go above the mud, uphill. But it turned out uphill was a muddy pool, and I was soaked up the knees. Once Cory picked himself up from all the laughter, we decided a little freezing water in my socks wouldn't kill me and we should really press on and find the castle (and I'd like to take a moment here to applaud my Balega socks...because I went hiking in November in Ireland with soaking wet socks and shoes and I hardly noticed!). After the sheep pasture, we climbed a fence to get to into a cow pasture, and then another fence to the castle! And it was...ok. The hike there in my wet shoes was so much better :) 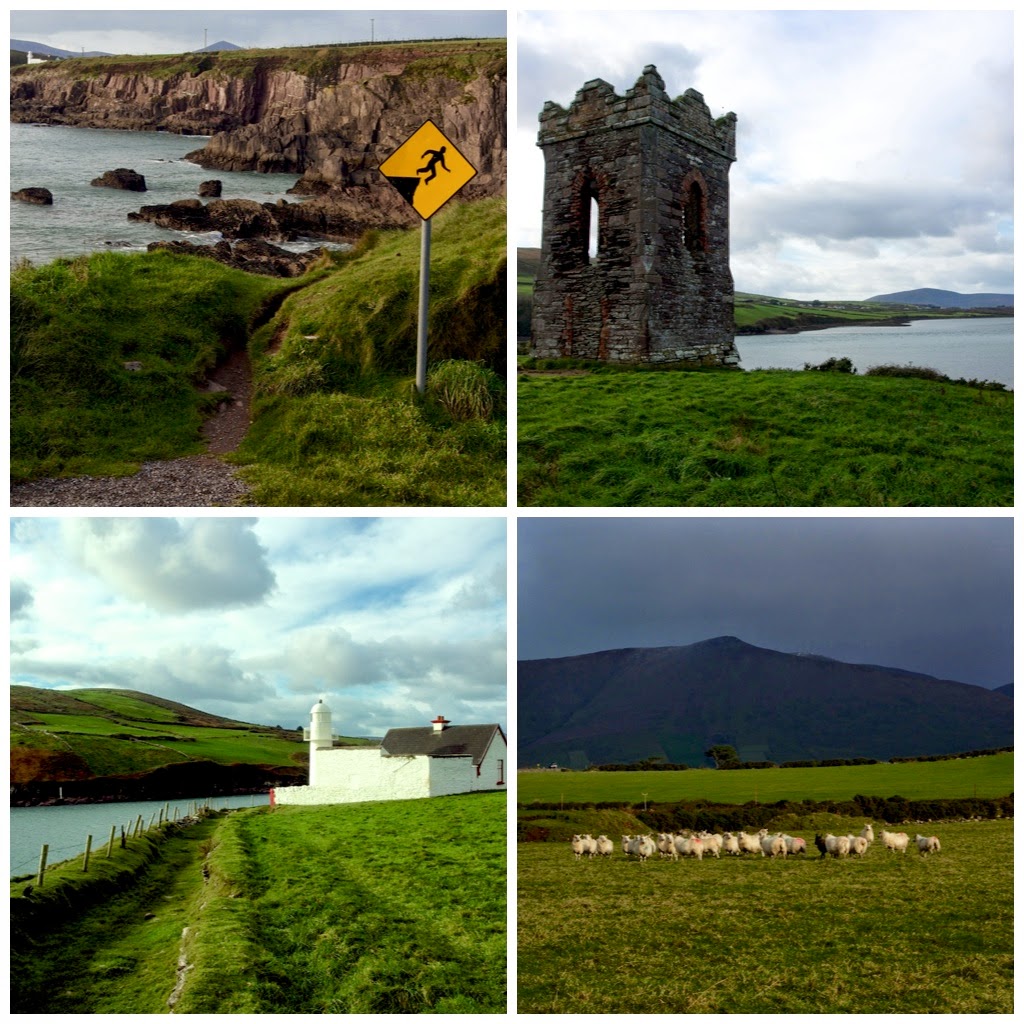 We continued east, meandering through little Irish towns, stopped in Waterford for dinner (where Waterford Crystal comes from) and found an incredible little Polish restaurant, Koliba. We were the only ones there and when the Polish owner found out we had been there a few months earlier, I'm pretty sure she brought us a bit of everything they serve. It was a truly delicious and incredibly memorable meal. But enough stops! There's still a few hours to Kilkenny and we don't yet have a bed for the night.

We drove down the main street in Kilkenny (a charming medieval town) and saw a sign in a pub window saying "accomodations" so I stopped in to ask. For a mere $20 US we could have a charming private room above the empty pub. Yes please! And by charming, I mean the walls and ceiling were peeling and the heat was broken, but it was ours and it was cheap!

After a cold sleep, we had a few hours to see the town before we needed to be in Dublin for our flight, so we went straight for the biggest draw in town: the Round Tower at St. Canice's Cathedral. Although it was windy and positively freezing outside, the nice church lady opened the tower up for us and we made our bone-chilling way to the top, up the wooden staircase that ladders across the inside of the tower. The view from the top was excellent, until my nose froze and it was time to come down.

Back to Dublin, our amazing adventures on the Emerald Isle were over, though I know now without a doubt that we'll be back again. It is an incredible country, filled with friendly people, beautiful vistas, toe-tapping music, charming towns, fascinating history, and invigorating weather. Until next time, Ireland!

Overall Costs: The costs for our Irish adventure aren't really accurate, because our friends were so incredibly generous with us. These costs are only for the 4 days on our own, where we stayed in hotels and rented a car (again, Ireland has some expensive gas, but we saw so much of the countryside, we would absolutely do it again!). Average daily cost was $160, split between housing ($59 for two small inns, a night in Dublin, and a night in a hostel above a bar in Kilkenny), food (usually cold cut sandwiches from the supermarket) ($55), transit ($56) and other expenses ($5).
Posted by Unknown at 7:14 PM

Email ThisBlogThis!Share to TwitterShare to FacebookShare to Pinterest
Labels: Ireland