Halong Bay, and other Dragon Tails

I have been desperate to get to Halong Bay ever since I read about from in a high brow, totally brainy, literary source. Or it may have been after watching three delightfully bufoonish Brits motorcycle their way across Vietnam on Top Gear. The legend is that a dragon descended into a valley and swished his tail around, creating tall rocky mountains, floating in miles and miles of bright blue water. After having been there, I totally believe the legend.

We signed up for a 3 night, 2 day tour of the bay (our first organized tour so far this trip) and waited in Hanoi to be picked up and pampered (by pampered, I mean not having to make a decision or have a challenging interchange for 3 whole days). We were picked up by a mini bus full of mostly Westerners, and off we went for the 4 hour ride to the bay. Our comfort stop was made at a big tour stop, where they dropped us off at one side and told us to meet them on the other side of the massive shopportunity in half and hour. On the plus side, the bathrooms were really nice!

We arrived at the harbor in Halong Bay with about a million other tourists, getting on boats run from all different companies (we enjoyed our trip with V Spirit Cruises). As we stood chatting with our new Australian friends from the bus, Alyssa and Harry, we spotted a group of about 30 coeds, in big-arm tank tops and rainbow sombreros, having quite the fun time. Alyssa said, "they look like Americans" and Cory and I cringed. We don't look like that!

After a bit of waiting, it was time to take our tender boat to the main boat, a classic junk with room for about 30 passengers. Our room was so charming, even though it was next to the ship's engine, the whole room vibrated during the day, and the bed was at least a foot too short for each of us. But as we looked out the window to the magical Halong Bay, all was forgiven! 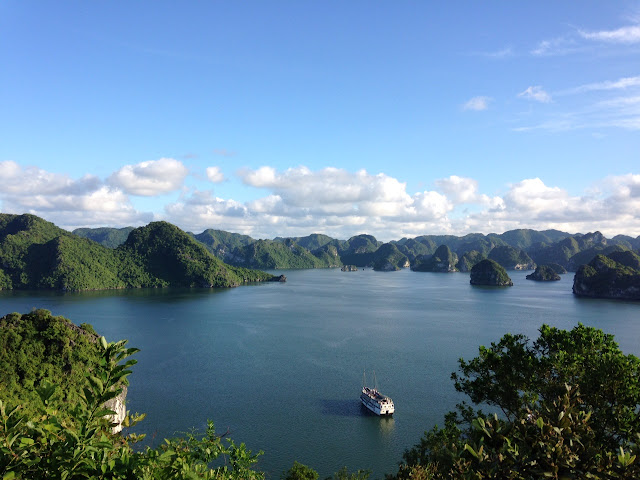 The rest of the day consisted of a multi-course lunch beginning with french fries (as it always does here), and a trip to a cave. As we lined up to enter the cave with all the other tourists on the bay that day, we heard happy music and a welcoming announcement over the loudspeaker and I was dead sure that we were in line for the Jungle Cruise at Disneyland. Had our happiness to have a tour for a few days screwed us up? Long lines at quasi-Disney is not exactly our traveling cup of tea. Follow this with a trip to the "beach" (a seriously dirty - like trash floating in the water - bit of bay crowded with bathers) and we weren't sure quite what shelling out a bucket of money had accomplished.

We had a wonderful dinner and nice sunset, followed by ship games, which in this case was building tangram shapes with your dinner table (clearly Cory's Waldorf education and my practice with Ms. Shaw in 6th grade math were well absorbed, because our table won the challenge, and the resulting prize of free beers!). And off to bed we went to get ready for a big day.

After seriously intending to get up to see the sun rise at 5am, followed by Tai Chi on the upper deck at 6:15, I instead set the alarm for 6, looked out the window, snapped this photo with the iPhone and went back to sleep til 7: 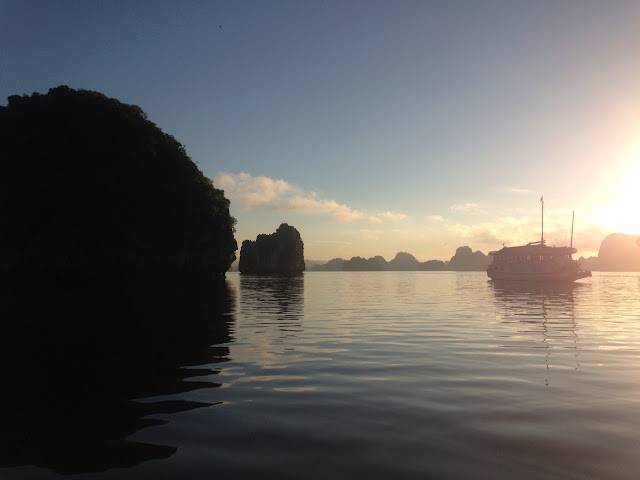 After breakfast, we boarded the day boat with just 7 others for a day out on the bay. We started with kayaking through incredible bat-filled caves and along sheer cliff faces, then headed back to the boat for another meal that started with french fries. After lunch, some reading, napping deck side, and swimming off the side of the boat. Nothing quite like a nap on the deck of the only boat in view, in a bay such as Halong. After all that, we got our daily shopportunity at a pearl farm, and then back to the main boat in time for sunset. As the sun set, we watched the newbies swimming at nasty beach while we drank beers and chatted about our amazing, secluded, clean water day with our new day boat friends: Tighe (a doctor from Ireland who the tour company kept forgetting about, and Graeme and Judith, a doctor and physicist from New Zealand).

Up the next morning at sun rise for our last morning on the boat, we went kayaking with Tighe, Graeme and Judith through a cave and around a small cove, when the sky opened up and started pouring tigers and monkeys. We took refuge under a cliff face, and once I determined that a little warm rain wouldn't sink our kayak, we all decided to explore a bit in the rain.

All in all, Halong Bay was far bigger, more impressive, and more beautiful than I had imagined, and  when we returned to shore and saw the loud westerners with the rainbow sombreros, we were pleased to find out that they were British. 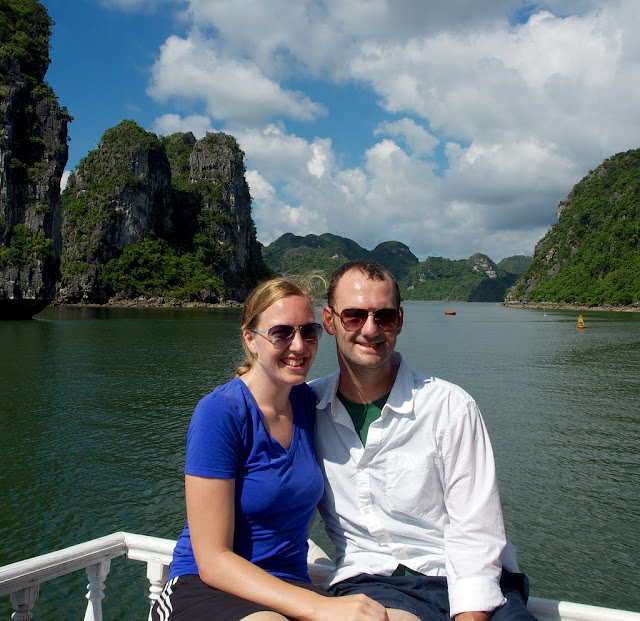 Travel tips for Halong Bay:
There are so many tour companies it can be hard to know who to choose, or how to purchase the ticket. Because we have been using www.agoda.com for most of our hotel reservations this trip (not always the very best price, but I like their website layout, and we save money with their rewards program), we searched for hotels in Halong Bay and a bunch of the choices are for cruises, either 1 or 2 nights, ranging from $100 for 2 people for 2 nights to $400 for 2 people for 2 nights. It's important to read the fine print on the offers, as some do not include the 4 hours transit to/from Hanoi, some do not include all meals, and some do not include activities for free, such as kayaking. Ours was exclusive only of beverages, which they of course way overcharged on board, for $200 per night total. We were very happy with our experience on V Spirit Cruises!