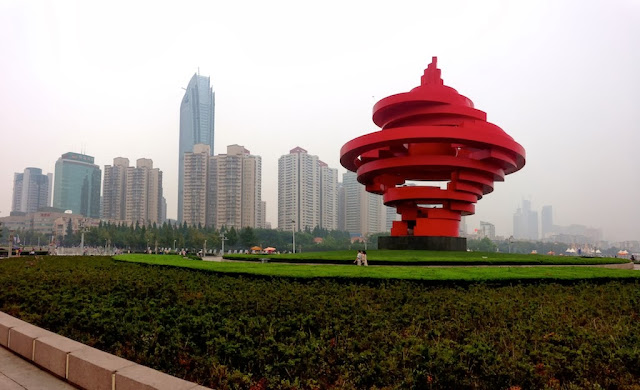 After some weeks of non-stop sightseeing, it was time for a break (yes, I'm aware we just had a nice weeklong break in Shanghai...but this is our life and sometimes we feel we've earned a little vacation time!). We headed to Qingdao, a seaside city between Shanghai and Beijing for a little rest. Qingdao is home to Tsingtao Beer, and was a German concession, so we figured we were heading into a little slice of easy European heaven as a break from China. We were not correct.

The Tsingtao is plentiful and delicious. But the German heritage is hardly present. Unless you count a "German Street" that is filled with dilapidated buildings the Germans built, and a few "German" restaurants that look oddly enough just like Chinese banquet halls (chopsticks and all). Once we gave up on the historic European seaside resort town idea, things improved considerably!

Turns out Qingdao was the home of the sailing events for the 2008 Olympics, so they have a lovely waterfront area where you can stroll, drink beer from a plastic bag, and enjoy the Olympic Rings. In the evenings, huge groups of locals do exercises in the shadow of the the May 4th Square statue (and we were happy to join them!). Unlike the rest of the city, the water front has lots of cute cafes, serving up fun desserts and frothy coffee beverages, and there is an oddly charming loudspeaker welcoming us (in English) to the "Qingdao Maritime Tourist Experience" (we're not sure why it was in English...I'm not sure there were any other English speakers in town!).

We stayed at a hilariously terrible hostel in the old town. The staff were friendly, but knew absolutely nothing about the (fairly small) town. When I asked what bus would take us to the waterfront, the response was, "many!" When I asked how to get to May 4th Square (the major monument of the entire town), she had no idea. When there were firecrackers being set off all over the city, and fireworks directly overhead of the hostel, I asked what the occasion was. The response? "Maybe someone is getting married?" When we asked for a map of the city, they said, "we already loaned out our map. We don't have any more." Arghghgh!!!!!!

After a not-so-restful week (though it certainly had its highlights), it was time to head for Xi'an! 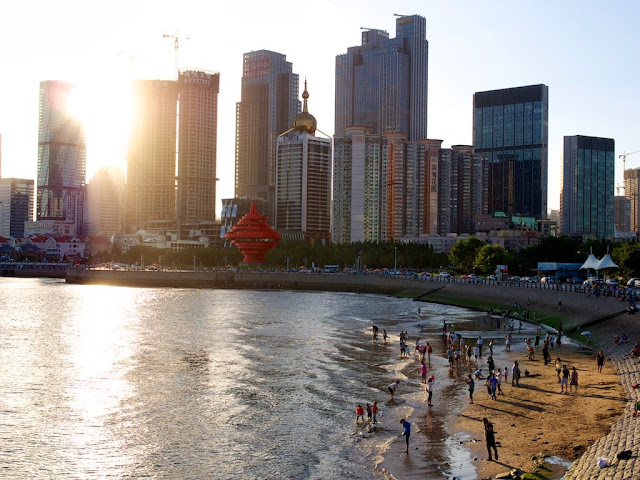 More photos from our weekend in Qingdao:

Qingdao Photos
Posted by Molly at 11:42 AM