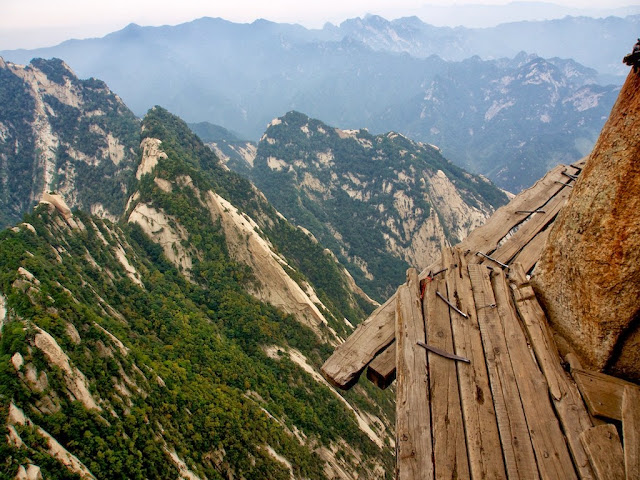 This story starts a year ago when I showed Molly a video on Youtube titled "World Scariest most dangerous hike!!" She promptly told me that if I thought she was going to ever do a hike like that then I had probably married the wrong girl.  Fast forward one year….

Huashan (Mount Hua) is one of China's five Great Mountains, and is quite a bit shorter then our last climb of Emeishan (only 7,000 feet).  While walking about the delightful city of Xi'an we realized that Huashan was only a thirty minute high speed train away, and as we had been having so much fun climbing China's mountains, we figured we would go for it! 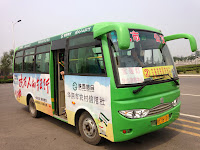 We woke up early the first day of our climb and hopped the speed train for Huashan. We exited the station, hit the gauntlet of taxi drivers, and started looking for the minibus to take us to the base of the mountain. We had overly friendly taxi driver tell us that there was no minibus that day and we might as well hop in his Taxi to get to the base of the mountain, for a mere 20Y.  After following us for about 5 minutes frantically explaining his story to us we finally arrived at the minibus stop where a bright green bus with the words "Huashan Tourist Bus" stood by waiting our arrival (for a budget friendly 1Y).

We got to the base of the mountain and got fairly confused. As the target tourist audience is Chinese (I'm pretty sure we were the only westerners we saw for 2 days on the mountain), there is very little English spoken and all maps are in Chinese only. We were rescued by a lovely gentleman, Sam, who downloaded an english map to our phone, made sure we had enough water so we didn't have to buy any on the mountain, and even shared his cookies with us on the bus! We took a free shuttle bus to the West entrance, where we were delighted to find that our hike would begin in a beautiful Taoist temple. 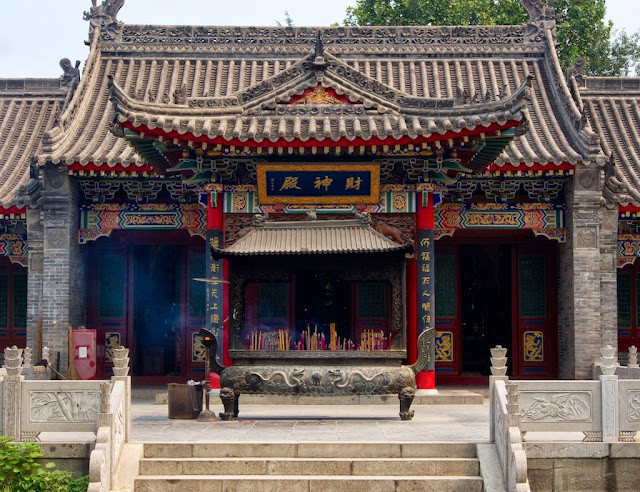 We started our walk up the mountain, which was lovely but quite smoggy. It was amazing how painful  it is to be out of breath in heavy smog, and also amazing how polluted the air could be so far away from a big city! As we walked with Sam we learned about what's its like to be a single 30-something Chinese man in search of a lady friend. He said he wanted a woman who would hike and go on outdoor adventures with him, and be happy with his job as a sales manager for a major telecom company. Apparently that doesn't describe the Chinese women he knows. We recommended he go to California :)

After starting our hike at just after noon, we reached the North Peak (the lowest of the 5 peaks) a few hours later. Over those hours, we covered the most vertical sections of the mountain, on stairs so steep we had to use the iron chains provided to hoist ourselves up (with our snazzy new $1 gloves!). The North Peak is also where the first cable car lets out, so the mountain became clogged with non-hikers, in fancy dress and heels. We continued on in order to make it to the East Peak by dark. 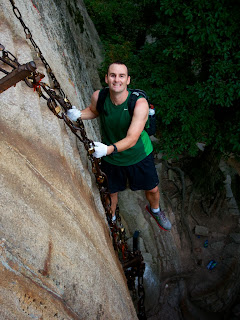 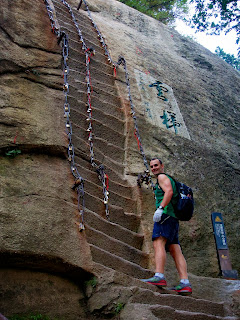 We finished the day at the East Peak, so as to be in the best position for sunrise the next morning. While researching for this climb, we read that food and drink would be super expensive, so we brought 8 PB&J sandwiches for lunch, dinner, breakfast and lunch (with some yak jerky and hawthorn gummies in between) and Pocari Sweat powder to make our water work that much harder for us (and the food and drinks were INSANELY expensive, unlike the other mountains we've climbed!!). By the time we got to the night stop, and went to the dining room for yet another PB&J, we were invited to a table of Chinese and British travelers. They were enjoying the biggest, most overpriced, vat of hot ginger soup EVER, and did I mention how cold it was? Molly broke the rudeness ice with, "boy, that soup sure looks good. I can't imagine you'll be able to finish it all. Do you mind if I just go ahead and help myself?" And we feasted on their gifts.

We spent that night in the most expensive hotel night we've had in China ($50 US for 2 beds in a 10 person dorm, in which chatting full volume at 3am was acceptable) for the worst night of sleep. We should have realized what a bad deal it was when Chinese travelers on our budget were renting down coats for the night and sleeping on benches outside instead of in the rooms.

The next morning, we got up at 5am for the sunrise. We lined up at the chains (there is VERY little guarding to ensure you don't fall right off this mountain!) and waited for a seriously beautiful sunrise. And while we waited, we locked our love to the railing. We thought this would be a nice spot for our love to watch the sun come up each morning. 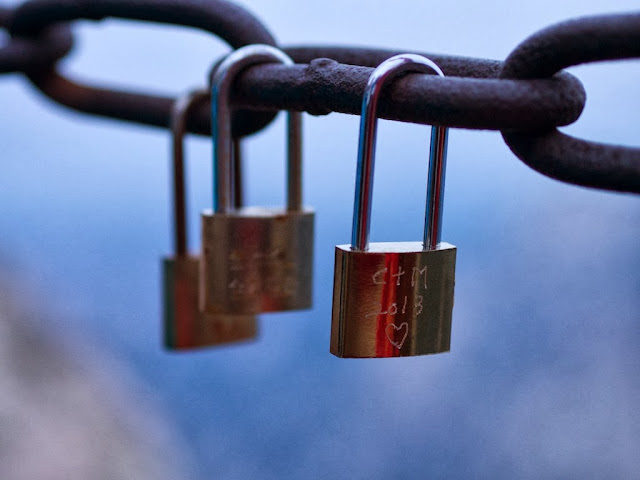 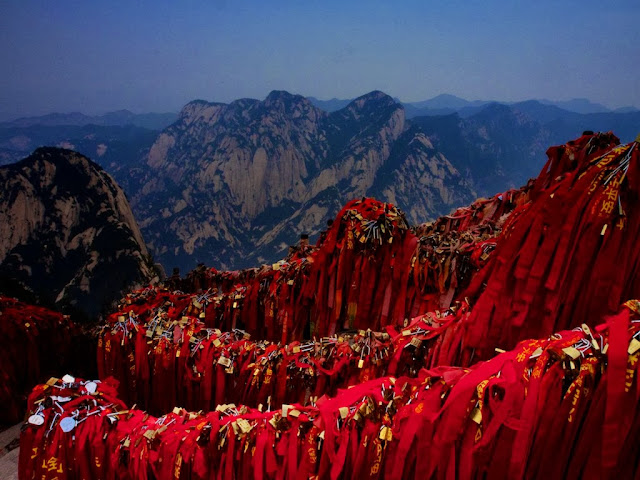 After sunrise, I took the Hawk's Trail to a pagoda in the sky, complete with a chess board! You have to climb down an inverted cliff ladder (attached to a flimsy trusty safety harness…don't worry, Mom) and then meander along the ridge of a small mountain peninsula. At the end is a small pagoda with 2 stone stools and a chess board, and the view is fabulous. Molly stayed behind to take photos and potentially watch her husband plunge to his death. 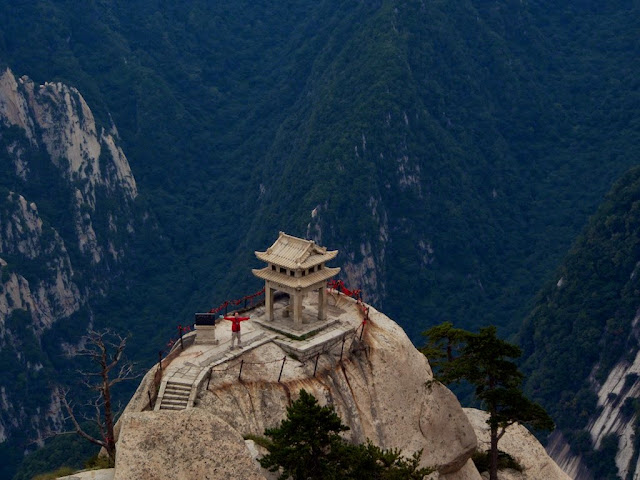 After that thrilling walk, it was time to walk the plank! Going in, I had no expectation of Molly doing the plank walk, and when we arrived, she said she wanted to do it too. She said she didn't come all way to China to not walk out over a flimsy set of boards, stapled to the side of a cliff by a few pieces of rebar.  After giving each other one "last" kiss, we headed down the rebar ladder leading to the plank. At the bottom, it turns into foot sized grooves in the mountain ladder.  Then you walk down the wooden planks around the side of the cliff (aptly named "Ear Hugging Cliff"), and there's a little temple on the end. All along the way, there are more iron chains to grip to (there's no way we'd want to rely on those trusty harnesses!).

Then you have to come back. And the worst part is that people are going both directions, so if someone's coming, you have to decide between you who is going to hug the mountain and who has to be on the outside. Usually, girls make a pretty easy case for getting to be on the inside. But Molly ran into one guy and there was a little cut out of the cliff next to where we were going to pass, so she went to snuggle into it, and he dove in first, rolled up in a teeny ball, hugging the cliff. He was oddly more scared than she was!

Along the way, Molly made me take tons of photos to prove to her dad and brothers that she actually did this. And yes, rest of the day was spent making terrible pirate jokes! 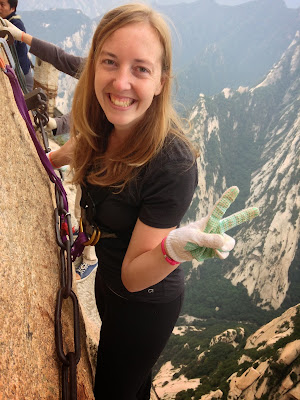 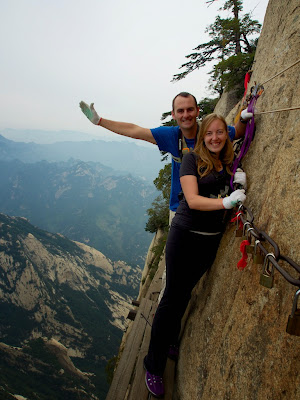 After the plank walk, we were suitably exhausted and ready to spend all the rest of our money to take the cable car to the bottom (and it was seriously a lot of money!). It was an incredibly hike, with super friendly travelers along the way, and we really recommend climbing your own Chinese mountain!

For more photos from our trip to Huashan: