A Relaxing Week in Budapest

We arrived in Budapest for 9 days of touristing, and in the end, we did a lot of relaxing! We rented a great little apartment in Pest (until arriving, we had no idea that the city is made up of Buda on the west side of the river and Pest on the east side) near the Margit Bridge and nested a bit.

Here's a sampling of our favorite sights and activities in Budapest: 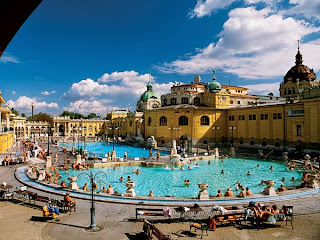 - Szechenyi Baths: Spending a few hours at the thermal baths is a delightful tradition in Budapest, enjoyed by a wide variety of locals (and as tourists we were quite welcome, though a bit
confused at first!). Although there are lots of bath complexes to choose from, we went to one of the oldest (built in 1913) and most fun (they had a whirly gig pool that was a giggly delight!).

- House of Terror: A moving and interesting museum about the Nazi and Communist occupations in Budapest. Part conceptual art museum, part educational history museum, and part memorial to those who were killed, the museum was just great. The educational part was a bit thorough (imagine a double sided, small print page of info for each room of the 3 story museum, to be read in a standing only room with loud music and strobe lights). But there's a tank in the atrium, a really cool exhibit on show trials and a 3 minute elevator ride in which you watch a video about their torture practices.

- Opera: After our fabulous experience at the Opera in Prague, we decided to go again in Budapest, and saw "Der Rosenkavalier" in the beautiful opera house. They sell super budget friendly tickets in the nosebleeds (I had to sit on Cory's lap to see the whole stage) but for $5 US you get the whole opera experience! The music was beautiful and the opera house was lovely. The only catch is that the opera was in German and the super titles were in Hungarian. So, we read the synopsis ahead of time and treated the experience like the old days when they didn't have super titles. Lovely!


- Margit Island: A beautiful island in the middle of the Danube River that's a runner's (and players) paradise. There's a squishy jogging path that circles the island, several sports and aquatic centers, and the ruins of an ancient cathedral, which you can climb on!

- Sunday Market at Szimpla: This is a really local farmers market in an old building and courtyard that's a bar come night time. Bustling with cheeses, breads, yogurts, pickled vegetable stalls and meats, there's also a stall that makes a big soup or stew at the back to feed those on a super budget (payment is on a donation basis). The bar is open for coffee, lattes and stronger drinks, and its just a really great weekly market!

More pictures of our week in Budapest: