Kunming: A Chinese Delight (even with the potential for a knife fight!) 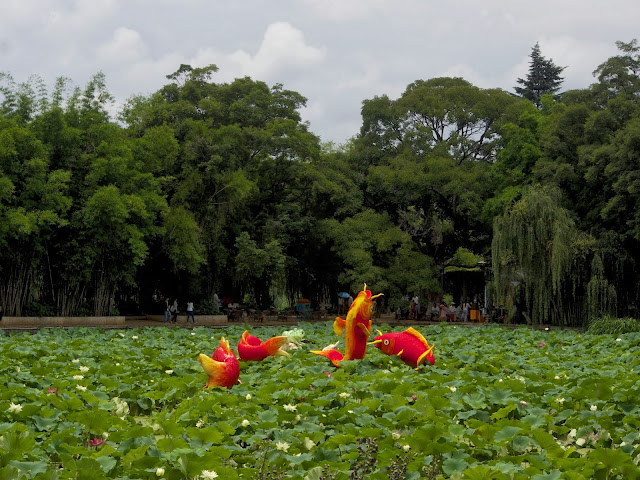 After our month in Vietnam, we arrived to the cool, spring air of Kunming and fell in love. For me, this is the first city we've been to on this trip where I could consider staying a while (don't worry, family, we're coming home!). With perpetually blue skies, clean air, and spring weather (Kunming is known as the City of Eternal Spring), it is an absolute delight to meander along the wide, uncluttered sidewalks, through the parks and down the old alleys. We had heard (and found to be true) that there is almost zero english spoken in Kunming (it's not a very popular tourist destination for westerners) but the people we met were overwhelmingly friendly and willing to help us, so the language barrier really wasn't a problem.


On arrival to our first hotel, the Guests Garden Hostel, we were presented with the interesting problem that the hotel sign was not in english, and the hotel was accessed up a staircase through the back of a little grocery. Once we sorted that out, the receptionist said that our bathroom would have a "Chinese Toilet"..."will that be ok?" To which Cory so helpfully responded "do you think we came to China to sit down?!" And sit down we would not! We had found ourselves with our first private squat toilet! And for an extra challenge (for a person as generally clumsy as me), the shower head was situated over the toilet, so while it was lovely that the toilet was always very clean, there was a challenge not to fall right in while showering.

For breakfast each morning, we set out to find some noodles. The traditional fare of the city is a dish called Across the Bridge Noodles, a multi-layered bowl of noodles, broth, various meats and vegetables. Our first time out for the noodles, we arrived the restaurant, purchased the first two items on the menu (and no, we weren't quite sure what they were), went to the window with our ticket to pick up our noodles, like everyone else, and were told "no." No explanation, no gesturing towards a different window. Just "no." Huh. Someone indicated that we should sit, so we did. Someone else took our ticket to presumably sort it out for us. And then we lost them. So now we had no food, and no ticket showing that we had paid for food (though I'm sure the cashier would have remembered two bumbling, big, white people). Eventually, some food showed up, our friendly local table neighbors showed us what to do, and we had a huge (and quite yummy) noodle meal for under $3 total!

We also met up with our new friends Helena and Dave to have some drinks at Moondogs, a bar with a generally nice mix of locals and expats. On this particular occasion, we narrowly avoided a knife fight, as recounted by Helena and Dave (imagine this section with a fabulous British accent, told by a guy who looks nothing like Jason Statham and a lady that looks just as posh as can be!):


Cory and Molly had recommended Moondog, a bar they’d enjoyed on their previous visit to Kunming, and it seemed an ideal place to catch up on talk of travelling, politics and favourite episodes of Fawlty Towers. Even more ideal (for me at least) was that it had one of the best selections of whisky this side of the Hebrides being generously poured by the Scottish friend of the owner who was standing in for the night behind the bar.

We hadn’t been there long when it became clear that a lone Japanese man at the bar was surreptitiously photographing us. This is not unusual in China (and I often wonder what exactly people do with the photographs of laowei that they collect on their travels. But that is a digression for another time).

The curious Japanese man finally plucked up the courage to come over and speak to us, and, dispensing with the more customary greeting, introduced himself with a question: “Jason?”. When he was met with bemused stares, our starry eyed friend elaborated: “Jason Statham?”

As a teacher, my students over the years have conferred upon me my fair share of unlikely lookalikes. The comparisons have ranged from Neil Patrick Harris (the student clearly trying to get an A) to Quentin Tarantino (trying to convince me that I should let them watch Pulp Fiction in class). In the end though most have tended to settle on Chicken Little.

It’s a long time since I last watched Lock, Stock and Two Smoking Barrels, but I don’t recall at any point did I experience that moment where I felt that I was looking into a mirror and, despite showing him pictures of the actual Jason Statham, we could not convince him otherwise. Thus ensued about two hours of circular conversation punctuated by the happy consolation that he proceeded to buy drinks for his hero for most of the night.

Good whisky, great company and an adoring new Japanese friend: this was quickly turning into one of the best nights of the trip so far.

As inevitably happens when you’re drinking Scottish sized drams, I needed to use the facilities. I stood up and, in a cosy, whisky induced fug, headed to the back of the bar where the sole toilet was located.

Outside the toilet were two locals, both worse-for-wear. One a gentleman of advanced years, struggling to hold himself up; the other younger and blackshirted. They were arguing. With all the gesticulations and posturing (mainly from Blackshirt) I could deduce that someone had broken some form of sacred bathroom etiquette. Not speaking any Chinese at all, and, quite frankly, needing to go pretty desperately, I tried to diffuse the situation. It didn’t help.

The three of us were at an impasse. Taking the foreign advantage, I went.

Relieved, I came out of the toilet (category 2 on Molly’s scale) to find the argument seemed to have run its course.

I returned to our table and our evening continued. Perhaps another half an hour or so passed and the seemingly insignificant incident was forgotten until, out of the blue, our table was surrounded by half a dozen men in black shirts and sunglasses who had been called up to deal with the ‘situation’. Worried that we’d unwittingly found ourselves in the hangout of the local mafia, I did exactly what anyone else would have done. I ran. With Corey and Molly close behind.

Meanwhile Helena, my lovely wife, was still sitting at the table we’d quickly evacuated, bravely holding on to our table. After all the bar was rather busy.

Fortunately the bar owner and a few of the regulars defused the situation and all speedily returned to normal. A little later, the affable Dutch owner of the bar casually told us that this sort of thing was a semi-regular occurrence and they have to be careful because occasionally some of the locals carry knives.

Presumably just in case someone cuts in front of them in the toilet queue.

Spots we loved in Kunming:
- Yuantong Temple: a beautiful temple built in the 9th century. We have seen some temples this trip (we're getting a little templed out to be honest) but this one was unusual and delightful. And that's aside from it's very reasonable price tag of 6 RMB (about $1 US). The central temple is in a moat of water, with strings of prayer flags out to the other courtyard buildings. And don't miss the high-fiving dragons in the hall directly behind the central temple!

- Yun Craft Workshop: there is a local arts and crafts shop located in an old Chinese house on a walking street behind a shopping mall downtown, just around the corner from the Flower and Bird Market (the street, of a name we don't know, is flanked by Dairy Queen's on both ends). The house is divided such that each room has crafts by a different ethnic minority of Yunnan, and is filled with textiles, jewelry, tea sets, and food delicacies. Upon arrival, we were given a somewhat-english-speaking tour guide to take us around the house and tell us about the different minorities and their traditional crafts. We highly recommend finding this spot!!

- Green Lake Park (Cuihu Lake): A beautiful (and free!) lake to meander around and through, with groups of locals singing and playing music, children running and learning to rollerblade, men practicing calligraphy on the ground with water, and groups dancing and practicing tai chi. Just perfect!

Tips for your trip to Kunming:
- To get an expat spin on the town (local and current events, forums, restaurant recommendations) check out www.gokunming.com.
- We stayed in two different hotels, but would recommend the Fairyland Hotel Jingxing (No. 15-16 East Shifu St, Kunming). Yes, the bathroom was a bit...open, and the breakfast consisted of a bowl of spicy noodles with weird pickled vegetables, but the location was great and the bed was super comfy.