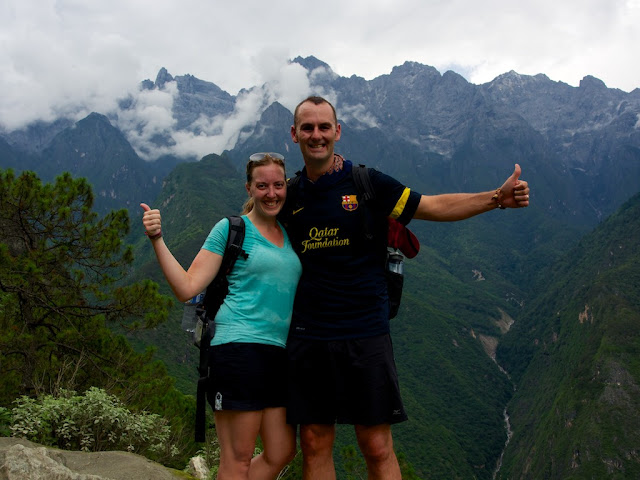 Friday morning, Molly and I are having breakfast at a small upstairs cafe in the small Chinese mountain town of Lijiang.  It has now been raining for 3 days straight and our hope of having some kind if break in the weather is quickly diminishing.  We had hoped that although we were in the middle of the rainy season that maybe we could catch a few days of sunlight in order to trek Tiger Leaping Gorge.  We decided to take a chance, we would take the bus the next morning to the Gorge and rain be damned we were going to try  hike at least a section of the trail.

Saturday morning we woke up early to catch our bus and to our delight, NO RAIN!  We arrived at Qioutou ("Chi-uh-toe") which is the start of the Trail and the sun was shining bright; the first few hours of the hike we used our umbrellas to shield us from the sun instead of the rain. 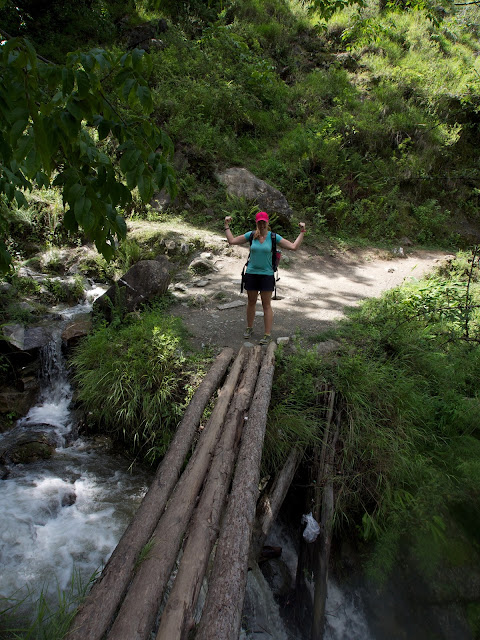 The legend states the a hunter was chasing a Tiger through the gorge, and when the Hunter was closing in, in the Tiger leaped from a giant stone across the Yangtze river landing safely on the other side. The Yangtze river runs furiously through the narrow steep walled gorge.  The Tiger Leaping Gorge trek is one that can take between one and three days depending on how far you decide to go.  The trail is dotted with local villagers selling anything from Red Bull to a Snickers bar.  Also well spaced along the trail are Guest Houses that one can stay in at the end of the day or stop in for a hot  lunch.

We started the trek at 9am with our new Brit friends Helena and Dave, and after a few hours of hiking in the midday sun we arrived at Naxi Guest house and had a wonderful lunch of Chinese cabbage, Stir-fried Chicken with Peanuts and steamed rice.  I would say it was one of the better meals on the trail and fully recommend stopping there, the bathrooms are fairly nice too.

The next part of the trail was the toughest section, called the 28 bends.  Molly and I stopped counting at 15...we were too tired to count!   Once completing the bends you finally get a full view of the gorge: the view is breath taking and you must make sure to look where you are walking and not get swept up in the view (or you just might fall off the mountian).  The trail hugs the edge of the cliff and at some places is no more then one foot wide! 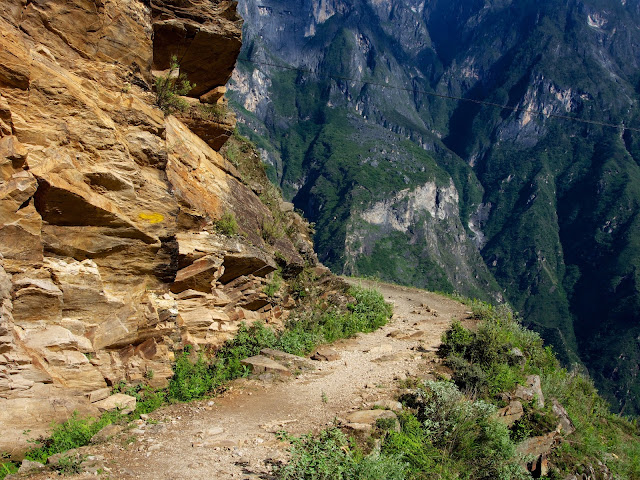 The views just kept getting better, and when we finally arrived at the Half Way Guest House at 6pm, we were physically broken; our feet were throbbing and our legs were wondering why we hated them so much.  Half Way Guest House has rooms with beautiful views for 80rmb (about $12 USD) and is famous for its toilets with a view. The very basic (and quite smelly)  squatty potties all have beautiful expansive views of the mountains across the gorge. The food was not particularly good, but dining on their rooftop terrace with other trekkers was a nice end to a long day. 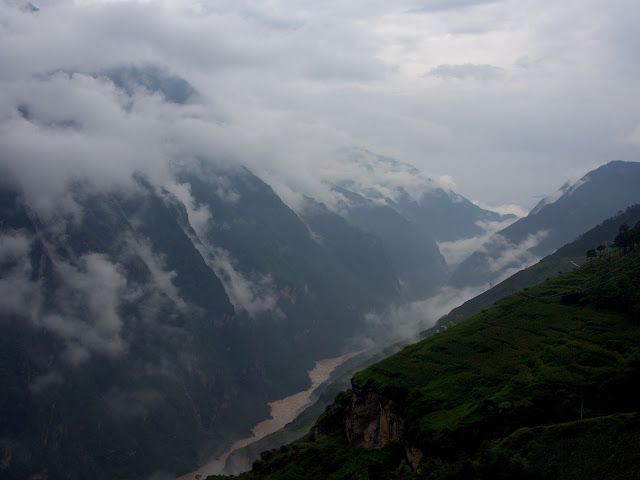 Sunday morning, after a long restful night we ate a leisurely breakfast (again not amazing), we strapped on our shoes and headed out.  The fog was thick and drizzly, and the view of the fog crawling over the mountain were incredible.The second day's hike had a number of new challenges in the form of waterfalls crossing the trail. We stopped several times to remove our shoes and then crab walk our way through the freezing water falls.  We then descended from the high trail down to Tina's Guest House for lunch. Lunch was ok but Tina herself isn't much of a charmer!

From Tina's we were planning on grabbing the bus back to Qiatou to head back south to Lijiang. We had read that the hike to Middle Rapids (and the stone from which the tiger leapt) was crazy steep, with dangerous and scary ladders and the wife half of this marriage just wasn't up for that. But then we saw some travelers come into Tina's, fresh from the Middle Rapids, and they looked overjoyed. We asked if they had been down to the river, and told them we were heading back to Lijiang and they said, "no!! You have to go! It's absolutely the best part of the entire hike!" So we exchanged our bus ticket to go back the next day, strapped on our packs, and headed down to the Yangtze.

The hike down cost 10rmb but for this you get the best maintained trail of the trek.  There are stone steps leading most of the way,  then steel ladders in some places.  Once down at the bottom, the Tiger Leaping Stone is a giant rock in the middle of the surging river. To get to the stone is a bridge that looks as if it was used in the filming of Indiana Jones and the Temple of Doom... seriously.  Standing on the Tiger Leaping Stone is incredible and feels like a reward for the two days of hiking it took to get there. The Yangtze rapids surges on either side of you, mist hits your face as you stand near the edge of the rock holding tightly to the shoddily erected safety cable. We couldn't believe we almost missed this incredible section of the gorge!


There is a trail that has been carved into the side of the cliff that leads from the Tiger Leaping Stone all the way to Walnut Garden which is where we had wanted to stay that night.  The trail was amazing, cutting its way along next to the Yangtze, over bamboo ladders and under small waterfalls.  It took us about two hours to reach Walnut Garden, where we had to sort through the many guesthouse options.  Sean's Guest House is one of the more popular spots online, but we had heard from folks on the trail that it was a bit run down and expensive (we later found out from our friends who stayed there that their roof leaked onto their bed in the middle of the night!) We ended up staying at Tibet Guest house, which is fairly new, not listed in guide books, and was absolutely delightful!  Our room was really nice, with views of the Gorge, a full bathroom and a western toilet. I hadn't seen one of those in about a week!  We had dinner at Sean's Guest House a few minutes down the road with some lovely British friends we had met along the trail (hi, Helena and Dave!).

The next morning, we were all prepared to walk back to Tina's GH to take the bus back to Lijiang, but then we met some travelers over breakfast. They had been to Shangri-la and thought it was just delightful. So, we went back to Tina's and changed our tickets to bus to Shangri-la instead!


Q&A for your own trip to Tiger Leaping Gorge:

Can I wear running shoes for this hike?
Yep! Hiking shoes would be better (for traction and ankle support) but we both did the trek in trail runners and would do it again!

Where should I stay and do I need to book ahead?
There are guest houses at least every 3 hours along the trail, and we just showed up without booking ahead, with no problem. Our favorites were the Naxi Family GH (about 2 hours east of Qiatou). Had a great lunch there and their bathrooms were the best on the trail :). We stayed overnight at the Halfway GH (famous for their view bathrooms). Private twin was 80 RMB for both of us, and we rented towels for a few RMB more. We forgot shampoo which was annoying. Food was not too crazy expensive, but was not particularly great. In Walnut Garden, we stayed at Tibet GH and thought it was just great (120 RMB with private bathroom).

Is it as scary/dangerous as I've read?
Hmmm...no. I hate to admit that this trail isn't as bad ass as people try to make it (but I'll spill the beans, because I was needlessly terrified heading into this hike). As long as you can walk straight down a sidewalk without falling off, you won't fall off the mountain. That being said, there were some waterfalls we had to crawl across, but if you're in good shape and pay attention, you probably won't fall off the mountain and die.

Do locals charge to cross paths?
Yes, but sometimes it's worth it. Walking east just after 28 bends is a charming man who wants you to pay him to take a picture of the Tiger Leaping Stone from his cliff. Too bad you can't see it from there (what a liar!). However, we did buy drinks from him because he did a whole charades episode for me to tell us that we would have a long happy marriage. Walking down to the stone from east of Tina's, we paid 20 RMB to go down the cliff and another 20 RMB to take the low trail to Walnut Garden, and they were well worth it - very nicely maintained paths and the money supports the locals who live there.

Do I have to carry all my food and drink?
No! There are plenty of vendors (you won't go more than 30 minutes without the ability to buy water at the least). Other bloggers have bitched about the cost but we felt like paying $1 for water and $2 for sports drink wasn't really outrageous out in the middle of nowhere. Just bring cash because you won't see an ATM again until you get back to Lijiang or Shangri-la.

Anything else that's important to know?
Yes, bring an umbrella! Because it will either be raining or hot and sunny and your umbrella is a great hiking buddy in either of these scenarios! 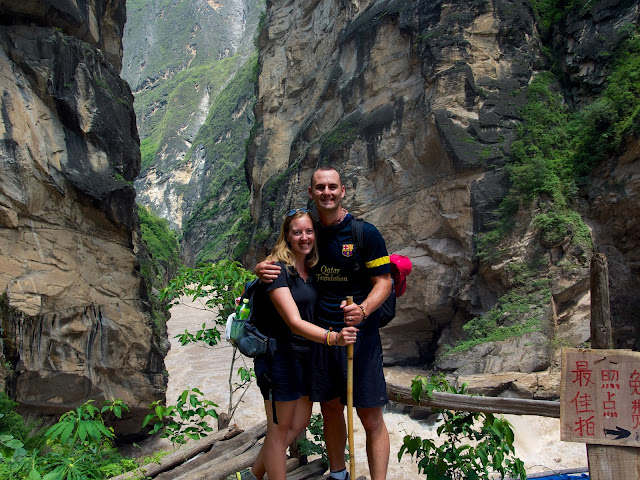 Tiger Leaping Gorge
Posted by Cory at 2:59 AM