After 2 months of hot, hot weather, we decided it was time to head into the mountains for some cool weather, and hopped on our best bus yet for Dalat, Vietnam. Although we chose a day bus (because it seems much safer, and we're not short on time), they only have sleeper buses from Saigon to Dalat. Unlike other photos I had seen of sleeper buses, this one was surprisingly nice! We each had a well-ventilated, sizable-enough reclining bed to enjoy for the 8 hour trip north. And although our driver drove as though he had a million dollar bonus awaiting him in Dalat (I've never before seen a bus pass on so many blind curves while honking angrily at the oncoming traffic, or honk while passing nice little families on bicycles driving in the torrential downpour). Maybe this is a cultural sensitivity problem on my part, but I basically think our driver was a big asshole! Somehow we arrived safely in Dalat and made it to the most charming little hotel (largely because of the insanely friendly and adorable couple who run the place). The weather was 68 degrees and drizzly (and we were so happy to be back to sweaters and jeans!), and the town just lovely. Dalat is centered around the lake and central market, with little cafes and street food all over. It was a new experience for us, as there are very few westerners, as it's basically a tourist town for middle class Vietnamese. Odd to be in a touristy town that's not geared to us: very little english signage, but plenty of huge tour buses, honking and speeding their way through the twisty mountain village streets. 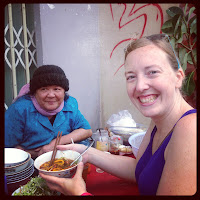 On par with a mountain tourist town, the food we had was basically terrible, with a few exceptions. After being told two (clearly open) restaurants were closed (we assume they didn't feel like dealing with non-Vietnamese speakers), we ate at a small restaurant (2 pre-school sized stools in front of a lady sitting on the sidewalk). She filled a bowl with fresh noodles and ladeled soup broth and unidentified meat pieces (the texture tells me it was not the standard Western meat parts) over the top. A side of freshly sliced avocado and warm tea rounded out our $1 meal. Not the best taste, but a great memory. For better taste, see V Cafe below :)

The tourist attractions of Dalat are a little odd, though the town itself is charming to enjoy. You can visit the summer palace of the king from the 1950's, which one might assume would be like the Independence Palace in Saigon. One would be mistaken. Where Independence Palace is a fascinating look into the 60's, the summer palace is more like walking through an open house (booties and all) of a tired, dirty house that Grandma never wanted to renovate, and now it needs it...bad! The only english information in the house was regarding the various hunting "trophies" displayed throughout. The only exception to the old, tired house rule is the throne room, where you can dress up in royal outfits and have your photo taken. Super weird to visit, but also quite cheap if you're on your scooter and it starts pouring and you need to get inside for 20 minutes :)

Spots we loved in Dalat:

Paris Hotel: charming hotel near the center of town, run by a charming couple, with pet hamsters in the lobby, laundry that comes back in 3 hours, and inexpensive scooters for rent. Plus, we got hugs and waves goodbye as we drove away on the bus...awesome! Only problem was the family of rooster just outside our window who thought 2am was sunrise, and therefore time to talk!

V Cafe: Best restaurant we found in Dalat, with great live music at 7:30 each night. Had dinner here 3 times (in 4 days), and on our last day, we met the owner, Curtis, who invited us in for drinks, nachos and lots of advice and ideas about our upcoming stops in China. Meeting Curtis and his lovely frenchman friend, Francois, was a fantastic evening to end our time in Dalat!

Datanla Falls Roller Coaster: Best thing EVER (and would never be allowed in the US)!! We took our scooter out to Datanla Falls, just outside town. Small fee to get into the park, and then you pay $2.25 each for a roundtrip on the roller coaster, a single car track where you are in control of your own braking (and you hope the person in the car behind you is paying attention so you don't get hit!). So fun we did this 3 times!

Windmills Cafe: a totally charming little second floor cafe in the center of town, with super friendly staff and delicious cappuccinos with the best latte art I've ever seen! We spend many rainy afternoons here, practicing english with the staff and enjoying their latte art, wifi, and positioning over (but thankfully above) the zany street. View Some more photos from our Trip to Dalat here: