Siem Reap and the Temples of Angkor Wat

After an emotionally tiring week in Phnom Penh, it was time to head north to Siem Reap, and see the temples of Angkor Wat. We hopped on our first long bus this trip, a 7 hour journey north across Cambodia. We did some research and picked Giant Ibis, as they pride themselves on having lots of legroom (and boy, did they!). As long bus rides go, it was an easy one through the countryside. Every once in a while (ok, frequently), our driver would lay on the horn, indicating to the cow (or two or three) on the road that they would need to move. Very rural indeed!

We arrived safely, got to our pretty hotel, The Golden Mango (yep, picked purely for the name, as I am a sucker for a mango!), and prepared for 3 days at the temples. We gave ourselves a couple of days by the pool to get over our head colds, not wanting to tackle a day of temple touring feeling like crap (especially with the insanely hot weather!).

We hired a guide and a tuk tuk driver for the first day (at a ridiculously reasonable cost of $25 for the guide and $15 for the driver...for the whole day!), and learned A LOT. We didn't hire a guide again, and we certainly wouldn't recommend the one we ended up with. He didn't really "get" us and despite watching Cory take incredible, artsy photos of the temples, spent the morning trying to guide us to all the kitschy photo ops with all the other tourists (the Chinese tourists especially seem to love all the photos: you stand here and in the photo you're nose to nose with a Buddha that's 50 feet behind you, or you stand behind this headless statue and it looks like you have a stone body, etc).

Though Angkor Wat is the largest and most famous temple, the area is made up of many more temples, built over the span of about 300 years (starting in 900 and including additions and renovations over the years, including today).

So the next couple of days we took our favorite driver, Run, out and he was wonderful. Gave us a little info (and our Lonely Planet book gave us the rest), and stopped anywhere we wanted (which was usually a random spot that we found really cool that everyone else was speeding right by).


On our third morning, we went to Angkor Wat to see the sun rise overhead, and although we missed the sunrise (it wasn't spectacular that morning), we had the best day!
After the sun was overhead, we walked through the temple and walked into the jungle a ways, hoping to see some monkeys (but seeing none). We gave up and went back up to the temple, to see the most incredible, feisty, families of monkeys, all enjoying the early morning on the back wall of Angkor Wat. 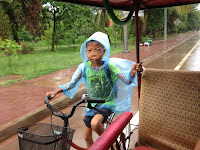 After a good half hour of enjoying the cute little guys, we went back to our tuk tuk to head back to bed. As we crossed the bridge over the temple moat, it started sprinkling. By the time we reached the tuk tuk, it was a torrential downpour! As we sped home in the downpour, we heard a little "hi" and looked over to see a charming local boy who was hitching a ride with us to school. After a while, he said, "this is my school!" and waved and smiled as he pedaled off! 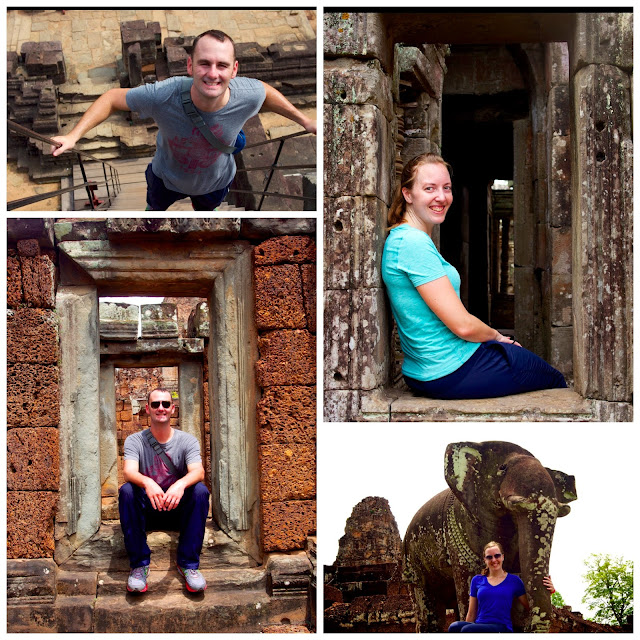 Here are some of our favorite photos from the temples of Angkor Wat:

Final costs for Cambodia: $441 on housing (avg $29.40 per night), $551 on food (avg $37 per day), $189 on transit, including tuk tuks and buses across country (avg $12.60 per day), $264 on other, including tickets/guide/driver for Angkor Wat, haircuts and mini golf, (avg $18 per day). Total costs for 15 days (not including $58 visa fee): $1445.76. Daily average cost: $96.38. Budgeting and spending money in Cambodia was delightfully easy after so much conversion, because they use US Dollars, and Cambodian Riels (4000 riels to $1) for anything smaller than $1. The only problem is that ATMs hand out $100 bills (which is way to much to spend in one place!) and the ATMs give torn bills sometimes, which no one in Cambodia will accept as legal tender. If we were returning, we would bring $500 in one dollar denominations!

Our favorite restaurants and attractions in Siem Reap:

Angkor Wat Putt - mini putt made by an incredibly entrepreneurial Cambodian guy, who had never been to a mini golf course but read about it on the internet and decided to make one in Siem Reap. Lots of fun!

Beatocello concert - a weekly cello concert and presentation about the state of the children's heathcare system in Cambodia. Very interesting and worthwhile. The doctor who started a series of privately funded, free for all patients, children's hospitals across Cambodia, plays the cello and speaks about the hospitals to raise money. If you'd like to donate, as we did, the website is: http://www.beat-richner.ch/.

Email ThisBlogThis!Share to TwitterShare to FacebookShare to Pinterest
Labels: Cambodia