As is the thing to do on a multi-week trip to Hong Kong, we decided to head to Macau for an overmight. Only a short ferry ride (just about an hour) from central HK, Macau is very accessible, and does not require a visa. Not knowing quite what to expect (other than the "Vegas of Asia"), we hopped the ferry, found our hotel overlooking the racetrack (the Grandview Hotel) and did some exploring.

Macau is made up of three cities on two islands: Macau City, Taipa and Coloane. Day one we arrived at our hotel, got settled and then walked to Taipa Village, known as the most well-preserved section of Macau from the Portugese colonization. We had a wonderful lunch at a Portugese restaurant, A Petisqeira, and meandered through the Taipa Houses Museum, a series of old homes that depict what life was like in Macau in the early 1900's. We also got a taste of local treats in the village, as there are shop after shop selling Egg Tarts (different from those in HK because they have a far superior puff pastry base instead of a cookie crust base) and various meat jerkeys.

And then in the evening, we had a fabulous dinner experience (emphasis on the word "experience"). We hopped a cab to the north end of Macau (such a distance apparently that the first cab we got in kicked us back out because, despite the fact that we were showing him a street map of exactly where we wanted to go, he didn't know it and wasn't willing to try) to the IFT Educational Restaurant, a restaurant attached to a school of tourism. Once we found a cab driver that would drive us, we go the restaurant just on time and the magic begun!

Let me start by saying that I have enjoyed my fair share of fine dining, but I never realized how many decision points there are for the restaurant staff. I only realized it at this experience because the servers are learning how to make those decisions so quickly that you don't notice they are even making them. Such as: which hand do I use to lay the napkin in the customer's lap? Although I should deliver from the left and take from the right, should I break that rule if there is a circumstance that would make my presence less intrusive?

In addition to the food being absolutely fantastic, it was a fantastic value (we would have expected to pay double our entire bill in a regular restaurant), and the service was charming. The servers were clearly wanting to do their best, and having the instructors buzzing around giving them feedback and answering questions was a really fun part of the dinner. We would go back to Macau just to have dinner here again!!

The next day we woke up for a day of sightseeing before heading back to HK. Most of the day included being lost in a smoggy neighborhood, unable to find a taxi to get out, so we'll skip that part. There were, however, two highlights. One was going to the Ruins of the Church of St Paul, which is the remaining facade on a church that was built in Macau when it was a Portugese colony, and is an interesting mix of European and Chinese architecture.

More interestingly though, I remembered that George and Mary took a photo of some ruins in Macau, but I had forgotten to bring them so I could take the same photo. So we took some photos of this and that, and when we got back to HK, realized that we had taken the exact same photo from the exact same viewpoint!! Our guidebook said that the stairs leading up to the church were offset because at one point there were buildings on one side of the stairs, and I was surprised to see that those buildings were there in G & M's picture! 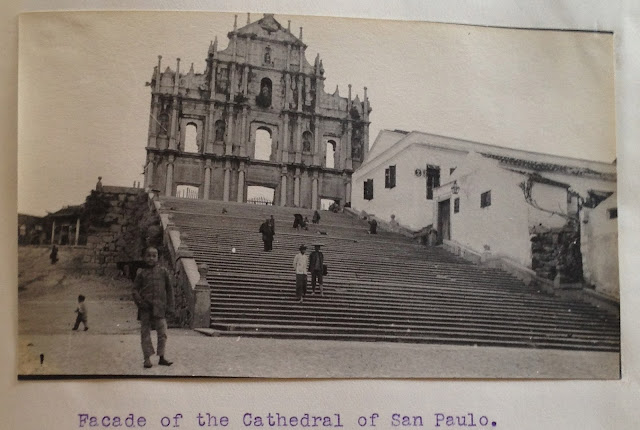 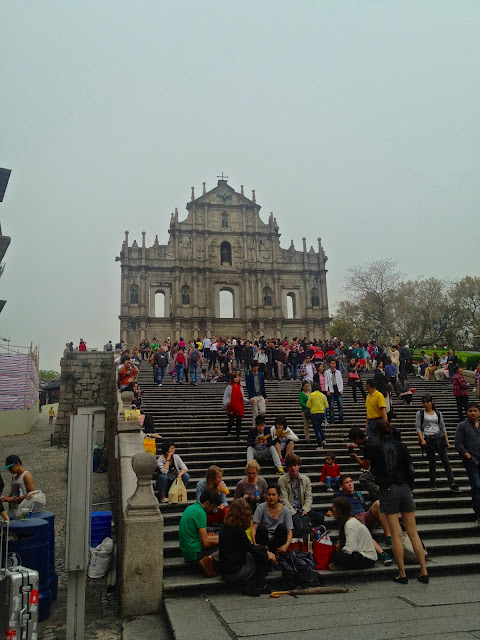 The other highlight of our day was when we were lost in the yucky neighborhood with no way out, we turned a corner, and there was a gondola, rising up to the top of a pretty green hill! Cory said, "wife! I'm getting you out of here!" (swoon!). We bought two one-way tickets and then Cory asked the salesperson, "so, where does this go?" She wasn't really into English, so we hopped on and ended up in the middle of a beautiful park. We meandered through the park and back to the ferry for an early ferry back to HK.

Thanks for an interesting overnighter, Macau!!

Overall costs for Macau: because we took the ferry over and then only stayed one night, we stayed in a nicer hotel and spent more for dinner then we have in a while. The per day cost for 2 days in Macau was $188 USD.
Posted by Cory at 9:41 PM